It was an Independence Day celebration in Belize!

NOTE- There are several videos in this story.  If you can't see them, please try viewing it on another device. The last few mposts have had videos which really enhance the story, but they do not play well on all devices.  I apologize for any inconvenience.

The Chicken Foot Eating Contest in Corazol, Belize was a big deal, and then things got really exciting!  We drove to Orange Walk Town and camped along the shores of the river just in time for the fun of the Belize Independence Day celebration!  This event includes a local carnival with rides and games, political speeches, fireworks and a huge parade.  Here are some highlights from these events, with photo captions.

Behind us is the largest flag in the country of Belize.  The man on the stage is extremely intoxicated.  He is shouting "this is all for the people" and "I am going to go home now" and waving his arms around excitedly!

This is the crowd at the town center.  Some people are seated, listening to speeches, but not very many!

After the speeches, the crowd moved to the streets to watch the parade.  This parade included over thirty entries.  We captured some video and photo images of various groups as they moved past us  It took about 4 hours for the parade to pass by! 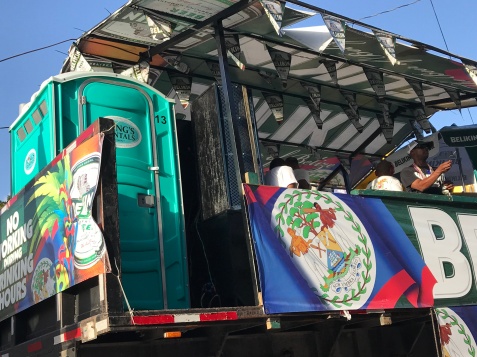 The beer company float had a portable-potti on board and was giving away free beer!

At night the carnival was in full-swing.  Loud music.  Excited kids.  Greasy fried foods. Families enjoying the cooler night air.  There were games of skill and chance.  Carnival rides included little ones for the children and even and old style ferris wheel and roller coaster.  If you ever wonder where carnival rides went when they were deemed outdated and unsafe ........ I think we found them here! Notice there are no safety fences, no handrails, no padding, no prevention for stupid behaviors.  This is a carnival of natural selection.... if you put your hand in the moving parts, you will be injured!

At the carnival there were many games of risk and chance.  This one involves putting a coin on a space represented on the spinning wheel.  If it stops on your space, you win.  The odds are terrible.  The electrical tape holding the arrow on the horses nose is terrible, too!

After the fun at the carnival, we stopped for ice cream and silliness.  This is Geneva (left) and Emma (right)  Our campsite at the river was shared with Big Emma and her team.

When we weren't in the action, we were relaxing at our riverfront paradise alongside Big Emma and her team.  It was a great location and even featured a regular visit from a crocodile which showed up for chicken scraps.  Because of the croc, we kept a close eye on Mango.  She liked hanging out under the VW, just like the old days!

A green iguana is cooling off under our bike rack.

Zeb meets a pet peccary through a picket fence. There's a tongue twister!

We camped at a marina for a few nights.  The dogs could not go near the water, as there were aggressive crocs in the area.

We made a stop at the Belize Zoo.  This was unusual for us, because we don't usually visit zoos.  But this one is known for its animal interaction and rescue of animals.  The zoo started when 18 jungle creatures had been captured for the filming of a documentary film.  Once captured, they could not be released.  Most of the animals at this zoo have a similar story.  We camped at their Tropical Education Center nearby, and rode our bikes to the zoo.  We met up with the "cat keeper" and he took us on a personal tour.  He was feeding the jaguars, ocelots and pumas.  It was an incredible opportunity to be just inches away from these majestic animals.

One town that we particularly enjoyed was Placencia.  We camped in the parking lot of a nice beachfront retreat hotel.  The town is a typical, laid-back beach town with a good vibe.  One day we rented a golf cart and took the dogs for a ride.  One evening we played bingo at a local bar.  Although the prices were high here, we enjoyed the area and the people we met.

Taking the dogs for a ride in a golf cart!

Playing bingo at the local bar.

Camped in the parking lot of a Placencia hotel

As we were leaving Placencia we stopped on the side of the road to try to assist our friends and Big Emma.  They had put up a tarp to stay out of the rain, and we attached our awning.  But a local family was walking by and the man claimed to be a mechanic, so he sort of took over.  When he advised that Big Emma should not use local water in her cooling system, we wondering about his effectiveness.  A 1978 VW bus has no radiator, it is air cooled! Regardless of his wisdom, or lack thereof, the bus was running again.  We tore down the rain shelter and went our separate ways.  Go Big Emma Go!

Near our camp spot a narrow trail winds through the grass.  This little path (see photos below) has been worn there by leaf-cutter ants.  The industrious group selects a tree and a certain date.  Then they work diligently, tramping down a path in the grass as they walk to and from their selected tree.  They each clip off a section of leaf and carry it back to the ant den to grow mushrooms with.  They feed the queen their mushrooms.  When it is time, they return to that tree, or one nearby, for more leaves! This well-worn trail shows the work of many teeny-tiny feet!

Punta Gorda was the Southernmost stop on our drive, and from there we worked our way back up the Hummingbird Highway.  Our next post will show you some more fun and action from our time in Belize!

Mike and Geneva Saint Amour spent several years in Prescott - Geneva was the first Director of Northpoint Expeditionary Learning Academy; Mike worked with Tim Carter in the County Superintendent’s office. After spending their careers in education, they decided it was time to travel. So, in October 2014, they packed up their 3 dogs into their VW van, dubbed Alta, and departed from Arizona with plans to travel indefinitely.

This column is about their adventures on the road. A few things have changed since their initial nomadic launch. They now drive The Beast - a GMC 2500HD 4x4 truck with a mounted, customized Northstar Arrow 8.5 camper. Unfortunately, two of their dogs have passed away. Only Zeb, their “director of security” remains. He is generally found sleeping on the job. Their current path has them traveling south.